As I write this I’m watching the Boston Marathon Tracker as a friend of mine from college is running.  Looks like its kind of a cold and rainy day in Boston this year.  But despite that she is keeping a pace that I could only dream of.

Boston has been dream of mine since I started running marathons nearly 8 years ago.  Alas I’ve never really dedicated enough time and effort to training since I would need to cut about an hour and a half off my best time to even think about qualifying.

But I have plenty of time between now and my marathon the Buckeye in December.  The Buckeye Marathon is a Boston qualifier so maybe…….

This past weekend I ran a 5K along with Coach V and the kids.  Well, I ran and the kids rode in the stroller/bike trailer while coach V pushed.

The Milk and Cookies 5K was a 1.5ish mile loop around the Scottsdale sports complex soccer fields.  It was a relatively flat course and a cool, windy morning.  Overall fun race.  and a pretty neat medal. And as always I was in my running kilt.

I was hoping to run around 24 minutes but fell way short of that at 27:45.  I kind of over did the training going into Saturday.  And as Coach V reminded me.  “You’re not training for a 5k I’m training for a half in 2 weeks.”

So, I’m not too disappointed with that time.  I finished around when Coach V and the kids where about to start their second lap so I walked that lap with them.

James ran the Snickerdoodle dash which was a 50m run for ages 4 and under.  It was ADORABLE!  Especially the ones that went part way and then turned around to go back.  James did well and only paused briefly when he saw his sister on the side cheering for him. 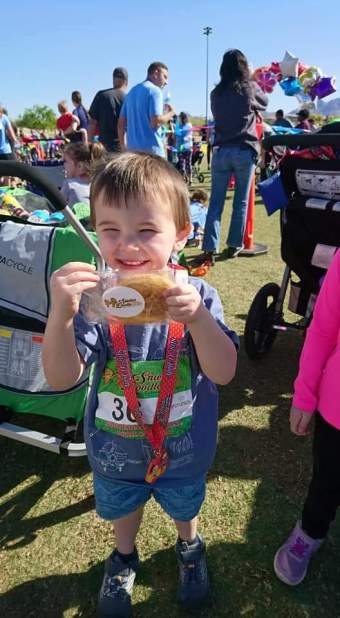 He is very proud of his medal.

We celebrated our achievements by going to my favorite post race restaurant US EGG.  They have the BEST protein pancakes (dramatic pause) in the world.  Along with bacon, eggs, hash browns, and as much coffee as I can drink, which is a lot, its the perfect post race breakfast\bunch. 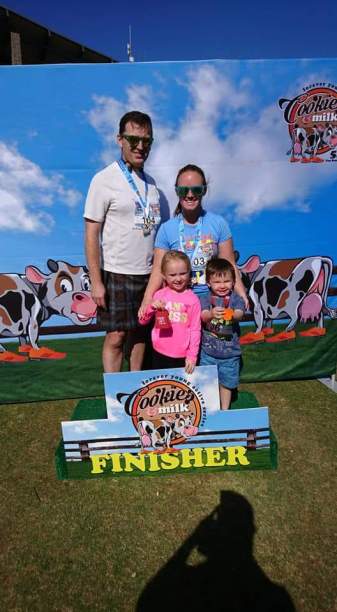 The longest run of the training program. 11 miles.  We started off fairly early to avoid some of the heat here in the valley of the sun.  And Coach V picked a new running path for a change of scenery.  Nice path and I was feeling pretty good when the path ended.  Some construction caused the temporary closing of part of the finished path.  But the trail continued as long as you didn’t mind off roading it a little bit.  Coach told me to press on and that she would catch up.  I got back to a sidewalk well ahead at this point and decided to run along the road to get back on the path a little further on.  I took one wrong turn that looked like the path but was just an access road.  Luckily coach caught up and got me straightened out and back to the running path.  The end of the run was along a street to get back to the van.

It was along the street that I finally after weeks of running felt like I hit a groove and could run forever.  My mind quieted down, the aches and pains and twinges that I had been plagued with subsided and I was just running.  The traffic even seemed to quiet down.  I could even hardly tell that my legs where moving much less maintaining a 9:45 pace.  It was a very zen moment and I hope that I can find it again on race day.

About mile nine the euphoria was gone and my legs, mostly my calves, started screaming in protest.  The last 2 miles where amazingly agonizing.  If it hadn’t been for coach encouraging me I’m not sure I would have finished the run.  But I did in 1:53:27. A little slow but we did have to stop to figure out where we were going a couple of times.

To celebrate the end of the long runs we went to my favorite coffee place Dutch Bros!  Because nothing sounds better after 11 miles than a blended 911 (irish crème and 6 shots of espresso). 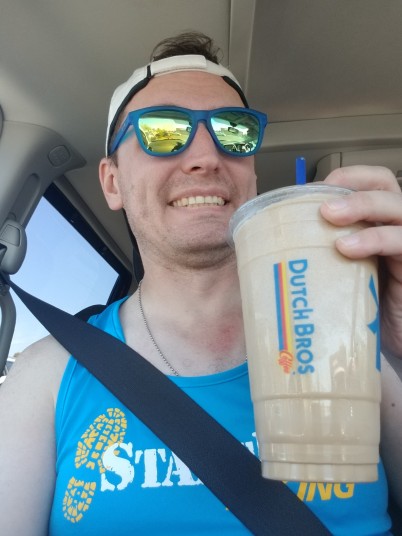 So, I’m officially in the taper now.  I need to pay close attention to my diet over the next 2 weeks and try not to over train. So we smoked a tri-tip to start the week off right! 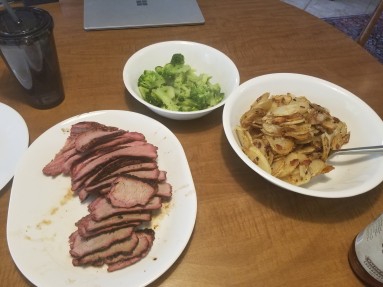 I do have one hard workout left on Thursday but its more about speed than distance.

I’m already getting nervous but I know that this is the most prepared that I’ve ever been for a half.  So, I’ll finish following the Boston Marathon and continue my rest day.