So, its been awhile. Life has a way of getting extremely busy especially during the summers. And add to that I wasn’t able to run the majority of June and I haven’t felt like writing much.

I was able to do the Spartan Stadion Race. While I wasn’t able to do it as quickly as I would have liked I had a blast doing it. That was mostly do to having someone from to run it with. Dr. Ryan, my chiropractor, did the race with me and was a lot of fun to run with. I probably would have slacked off it I hadn’t been trying to keep up with him. Managed to cut 10 minutes off my time from last year and reinforced that I still don’t know how to climb a rope. One day I will conquer my nemesis the rope!

After the Spartan I started running a the 2 min on/off cycle and only for around 2 miles. Until the end of June when one of the guys, John, goaded me into running with him. We maintained an ok pace, around 10 minute miles but we ran for all 4 miles. Came to find out that he had already done several miles before the group got there and continued for a couple more after. But, it was what I needed.

John also encouraged me to come out to the bike rides as a way to build fitness. So, I thought lets give it another try. Attempt #3 went a lot better. I took the old Schwinn and met up with the group. and it didn’t go too bad. Although, the guys did tell me that I was fighting the weight of the all steel bike and that a newer little bike would be amazing things to both my comfort level and ability to keep up.

The weekend while at a used sports equipment shop I found an aluminum Cannondale from the 90’s. On the first test ride with no adjustments I knew that they guys where right. The Cannondale was so much easier to ride than my Schwinn. So we got it. John had a set of clip-less pedals that he wasn’t using and told me I could have them. I just needed to get cleats and shoes.

Being attached to your pedals is kinda interesting. I feel like it didn’t take as much effort to get the same power per stroke the trade off being when you stop you have to remember to un-clip. If you don’t you slowly fall over. I’m happy to report that I remembered to un-clip before I stopped every time. However, three quarters of the way through the ride after having stopped I forgot to push off and get moving before clipping my right foot back in and slowly fell over on my left. I’m told this is a right of passage that everyone goes through. I was just bruised and had a couple of scraps so I was able to continue. And I dare say that I actually had fun.

I have now purchased a bike jersey and shorts to go along with my shoes. And since the group usually rides on Wednesday’s the jersey is hot pink and the shorts match. Why? Because on Wednesday’s we wear pink!

At the end of July I ran in the Swiss Days 5K with several of my cousins and brother. I knew that there was no way i could stay with my speedster cousins having only been back to running for 3 weeks but I still wanted to put up a decent time. My family did very well. I got 18th in my age group with a time of 28:46. Given that I’m still rebuilding from the injuries to my foot and calf I’m pretty happy. 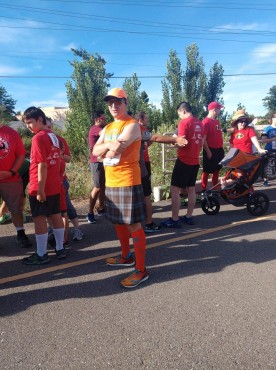 On the way home from the great Indiana road trip we stopped for the night in Albuquerque, NM and I found a great little 5K to run.  The Rudi Cancer 5K.  This is an annual run to benefit cancer research in honor of Kevin Rudi.  Compared to a lot of the runs I do this was very small.  About 60 people, mostly family and friends of the Rudi family.  His mom came and introduced herself to us and was extremely friendly.  Even though most of the field already knew each other they were all very welcoming.  It was one of the most challenging 5k courses I’ve encountered.  The entire first mile was uphill, the second was downhill and then back up for the third.  It was brutal, but a lot of fun.

It has got me re-evaluating my goals for the year. Between injuries, newborn, work, and we are trying to sell our house and find a new one, I’m not sure that my goal of sub-18 5K is reasonable.  I just don’t have the time to train without sacrificing time with my growing family.  So, this year my revised goal is to get my 5K under 24 minutes.  But, don’t think that I’ve given up on my quest for a sub 18, its just going to move to 2020. All the rest of the goals will then push back 1 year.  So it will look like this: 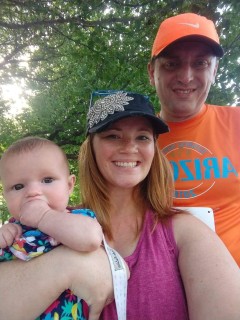 Due to the longer distances involved I’m going to give myself 2 years for both the half and full marathons.

There is SO MUCH more that has happened since the last post but that will have to wait for another time.